BARCELONA.- “…to question and reflect on the current state of artistic education, while at the same time creating a space of enunciation that is organic and alive, with the capacity to activate work dynamics and possible strategies for action in the field of art education, both in schools and museums.” This is how Juan Canela – curator of the Lesson 0 series along with Ane Agirre – formulated the aims of their project for the 2014-2015 season at Espai 13. The curators now present the publication produced in conjunction with the series, as a kind of epilogue. It covers all the exhibitions and actions associated with Lesson 0, but it is also a new stage in which the project continues in a different format. 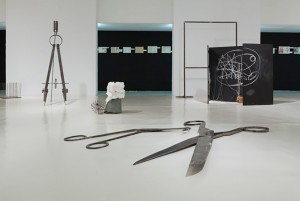 The Lesson 0 publication begins with a curatorial text by Canela and continues with an exercise in which Ane Agirre links the exhibitions in the series to French films on education, and a text by Aida Sánchez de Serdio, Cristian Añó, and Rachel Fendler which closes the mediation programme Friction Pedagogies that accompanies the series.

The publication also includes three essays that define the theoretical framework of the project. In the first, “Navigator: On the quest for radical education, don’t take the first turn”, educator and curator Nora Sternfeld offers an overview of the so-called “educational turn” and considers the implications of taking the transformative power of education into the museum. In “Towards a Socialism of Creation”, artist Luis Camnitzer advocates shared, rather than competitive, creativity, and in “Time to Let Go”, curator Chus Martínez explores the possibility of setting up a school that goes beyond the syllabus and generates new artistic and collective languages.

The publication also includes “Diary 0. 54 metaphors compiled as documents”, a series of metaphoric drawings on informal knowledge and emotions, created by Antonio Gagliano based on interviews with the agents involved in Lesson 0.

The book ends with a comprehensive overview of the exhibitions and activities in the series: the exhibitions by Priscila Fernandes, Rita Ponce de León, Anna Craycroft / Marc Vives, and Eva Kot’átková, and the actions and collaborations with the programmes Creadors EN RESIDÈNCIA, A*Desk, Secció Irregular at Mercat de les Flors, Komplot (Brussels) and La Ene (Buenos Aires).

The first project in the Lesson 0 series, Priscila Fernandes’ The Book of Aesthetic Education of the Modern School, was based on an overview of the legacy of Catalan educator Francesc Ferrer i Guàrdia. Fernandes explored the aesthetic influences the Modern School founded by Ferrer i Guàrdia, through a compilation of texts written before his death in 1909 by writers such as Leo Tolstoy, Pierre-Joseph Proudhon, Émile Zola, Paul Cézanne, Vincent Van Gough, Santiago Rusiñol, Louis H. Sullivan, and Filippo Marinetti. The book has now been published by Edicions Els Llums / Ediciones La Lluvia in Catalan and Spanish, under the title I l’art? / ¿Y el arte?, and will be launched along with the publication that closes the Lesson 0 series at the Fundació Joan Miró.